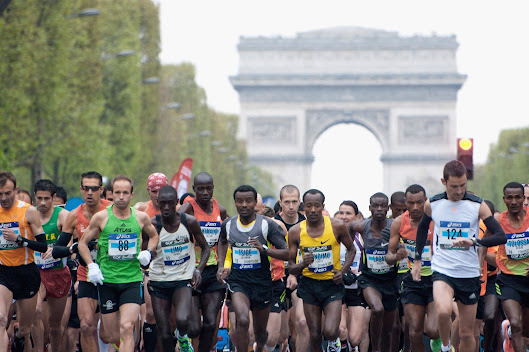 I never brought this up even though it’s a pretty normal occurrence in Paris, because truth be told, I hate running, I don’t pay attention to events regarding it, and I really only thought of bringing it up because I work for a global endurance competitive running/cycling company in our London office. I now realize that it's a pretty big deal for some people (to be fair our South American cycling event is pretty cool), and the people who attend these are genuinely super passionate about it (and cult-ishly fanatical).

But because I had never encountered it before, I didn't know about this subculture, and I don’t even really understand it now. Granted I only deal with our London office so all of the people I talk to are in the UK, or very few are Europeans coming to London specifically to take part in these events (yes even during Covid). A lot of the time I wonder who these people are, and what makes them want to do these events, that require a lot of training, you have to pay quite a bit to take part in, and they do it just for fun? Although we do have a few “death races” and events that you can only enter if you beat the other events.

But they have no bearing on your life whatsoever. Bragging rights? You don’t win a prize. And the people who compete are all types. I can talk to a newspaper magnate one minute, and a nurse the next. It’s super bizarre to me because I’ve never met people who are into these, and so as someone interested in humanity, I’m kind of fascinated by the type of people they are and what kind of lives they lead. One minute it’s the chief officer at Barcaly’s. Another it’s a man from the Midlands who is 77 (!!) and he does the events to stay fit (you have to be fit to do them so wow). Really all walks of life.

That said there are a lot of basic running events in Paris, nothing as intense as the kind my company puts on, though we have a few events in France. Marathons in Paris are so common that you don’t even notice them when you live there. It's mostly just an inconvenience when you try to take a cab on a Sunday. But seeing as how that can be a marathon, a manifestation (protest), or some other annoyance, for me they all get lumped into one. And as someone who isn’t a fan of running, why pay attention to those things? But I thought I’d try to help this newly discovered base (with my paper thin knowledge of France's events).

Running must be one of the French’s favorite pastimes. They even have a Salon de Running. I don’t know how many guys I dated who were like “I run marathons”. Bikes and marathons. I once had a boyfriend, Romain, who did Tour de France. There were a few football and rugby, but about 90% of them ran marathons. And Paris for what ever reason has a ton of events. I usually see some guy going home on the metro with his marathon kit on during the weekends. I guess it’s all about running along the Seine or past famous monuments. The Last Tango bridge is always barricaded on a Sunday because it’s a favorite spot.

I’m a swimmer, that’s my ‘sport’. I’ve played football, volleyball, and baseball, but running is not my jam. Short sprints only. I’ve never taken part in any of the events, but I know they have one for everyone, professional and amateur alike. One year a friend of mine told me she was going to run in a marathon and I was shocked because she was an alcoholic not an athlete. She didn’t even walk in her neighborhood, she Ubered everywhere, and the Marais is like a 5 minute walk end to end. You have to be phenomenally lazy to take a cab everywhere there. But it turns out this Women’s only event (La Parisienne) had a walking section and she was taking part in that (she took a bottle of wine with her 😒). 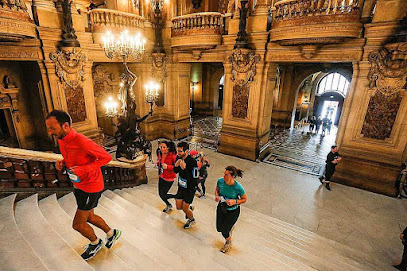 Another cool event is the museum run. I don't know how often they have them, but I know they had one on Museum Night 2019. In fact they didn't do many events that year because of the damn Museum run so I cursed it at the time for ruining the night. As a concept though it must be really cool to be able to go through empty museums.

Whether you’re a serious runner, or just looking for something to do on a boring Paris Sunday, you can definitely find an event to join. I’m sure there are serious events with serious runners, but if running is your jam, check out the social calendar. They have them all year round, on a monthly basis, so you’re bound to find one coming up soon. I think the soonest I saw one planned was for September (of course).

Now if you have any questions about events in the UK (or some of our European events because we are in 18 countries), sadly I now have encyclopedic knowledge of that. I have to know all of the events, and they give us tickets and passes and merchandise, and my travel to events is comped because they want me us attend them (which I do not want). As someone who accepts jobs based partially on the perks I receive, it’s so useless to me *le sigh*. But I’m happy to be able to travel for free so errrr thanks for that trip to Edinburgh and Sussex? Meh. I would like to check out that South American cycling event though…