For those of you who have lived in Paris for a few years you’ll know of “minimalist” boulangeries/patisseries around the city. There is Mori Yoshida which I learned about when I lived on Breteuil. There is also Notre Patisserie which I learned of when I lived on rue Saint Dominique. Those are just the ones I know of because I lived near them. There are probably dozens more in places like the Marais or in St. Germain, or really anywhere tourists congregate.

Minimalist Parisian boulangeries or “designer” patisseries are not exactly a new concept. Sometimes they blend with “millennial” boulangeries like Yann Couvreur. When I stayed at Goncourt it used to get busy, and I’m not even sure how because it was gentrification before that area of the city went through gentrification. I don’t know about now as I haven’t been that way since 2019, but I think there are 3 locations around the city. Designer boulangeries as a concept are visually pleasing, but I wouldn’t want to pay 1,40€ for my daily croissant.

The reason I bring it up is because I get that it’s probably something touristy to visit, and sounds cool in magazines, but anyone who lives in Paris probably doesn’t choose them as their daily spot. I think most people consider their boulangerie a mainstay staple. They’re cozy, they’re homey, they probably bring up a lot of nostalgia for the French. I knew a women who would buy a baguette for dinner every single night. Everyday Parisians go to their boulangeries for sustenance not novelty. 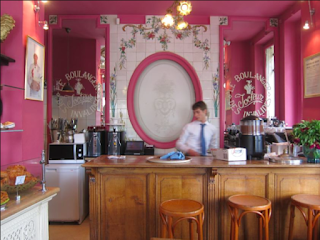 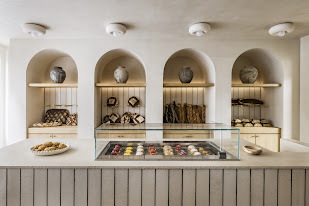 I don’t think I will be visiting Liberté (rue Saint Dominique) as my go to bakery. It’s a bit too dystopian for my tastes (above left), but for anyone who is interested in the minimalist concept, it’s the newest one on the block (or at least in my neighborhood). When I want to show off a spot I much prefer the traditional La Boulangerie des Invalides (above right). With it’s pink walls, array of plates, and chicken statues (yes, I am aware that the French national animal is “Coq Gaulois”). For anyone who has visited my Insta you’ll recognize that chicken picture.

And speaking of visually pleasing, while you’re in the area check out Aux Merveilleux de Fred. I first discovered it at the St. Dominique location, but didn’t really check them out until I lived in Passy. They just always looked too fancy and rich for my blood. They make the cakes in front of windows so you can see the process. Not to mention they’re just really pretty and over the top for what it is. It’s my idea of how everything in France should look, like Louis XIV threw up on it. Just rococo everything to the hilt. The chandeliers are *chef's kiss*