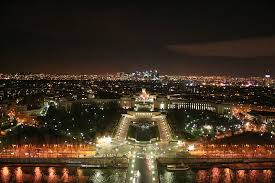 There have been reports of rampant pickpocketing. I guess because there aren’t any tourists? A friend who lives near Trocadéro said her neighbor had her phone stolen from her hand while she was entering the building. I’m used to it happening on the metro, or even shopping in Zara, but not while you’re standing in front of your building entering your code.

Because the city has been quieter than usual it's believed that they’re getting desperate. Le Monde had a short piece on the crime around Trocadéro. Apparently a group of young migrants has started camping out there. The park has never had a good reputation in general. I remember at night when Christian and I would walk through there to my flat at Passy the rats would be all over the trees, and you would see hundreds of them during heavy rains.

It's not the best place to be, but migrants hanging out at Pont d’Iena is nothing new. They’re always selling stuff and you’ll usually see them near Bir Hakeim running from the cops with their blankets of souvenirs. They never really hassle you unless you’re in Champ de Mars and they’re trying to sell beer, wine, and cigarettes. You have to stop your conversation every 5 minutes to tell them no.

Apparently it is also bad in Austerlitz. I haven't heard of any other areas. Just be mindful while you’re out and about.